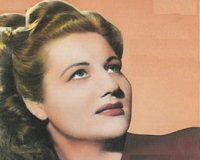 Description: Born as Patricia Sibley at 39 Coleman Road, Camberwell. In 1940 she moved to 142 Court Lane, Dulwich, where she lived for 50 years. She became a popular singer from 1940 and during the Second World War, she broadcast to the RAF during the long siege in Malta. She sang with Glenn Miller and Bing Crosby and in her later years she worked for the Not Forgotten association. She was awarded the Order of the British Empire (OBE) in 1990.

The 1/2 acre garden here is delightful and sometimes open to the public.

1» I followed the career of Anne Shelton from the very beginning in 1940 right up to the day she died in July 1994. I met her and other members of her lovely family on many occasions, and last year, June 3rd 2007 visited the open garden of her former home, 142 Court Lane, Dulwich where among other people was Kelly, her niece who has written her Aunts biography, and was selling copies to other visitors to the garden. The weather was perfect and I thorougly enjoyed the visit. The blue plaque to be placed on the house was thoroughly deserved after all her hard work as FORCES FAVOURITE during WW11 and for many years afterwards, not forgetting her time as Entertainments Officer for the Not Forgotten Association She was a big lady with an even bigger heart, and is still sadly missed. (Jim Woolley)
Posted by Jim Woolley on 2008-04-23