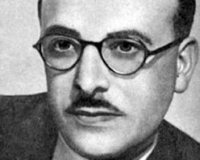 Michael Balcon's films include The 39 Steps and Dead of Night

Description: The famous film maker Michael Balcon was born in Birmingham, producing his first film Woman to Woman (for which a young Alfred Hitchcock was art director) in 1923.

He went on found Gainsborough Pictures in 1928 a year after he moved in to this house; and became head of Gaumont-British in 1931, moved to MGM British in 1936 and from 1937 to 1959 was head of Ealing studios during its glory years.

Among his landmark films were, The 39 Steps, Dead of Night, Kind Hearts and Coronets, The Man in the White Suit, Dunkirk, Saturday Night Sunday Morning and Tom Jones. His track record is unrivalled.

Sir Michael Balcon was a man of unquenchable patriotism, honesty and decency who never relinquished his belief in the necessity for a British film industry reflecting our native culture. Among the major talents to whom he gave early opportunities was Alfred Hitchcock.