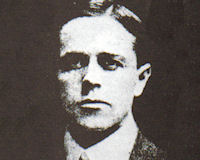 Description: This is the house where the German born George Ives (1867-1950) lived from 1906 to his death. He was a poet, writer, penal reformer and early gay rights campaigner.

Ives was educated at Magdalene College in Cambridge, where he started to amass 45 volumes of scrapbooks of press clippings of murders, punishments, freaks, theories of crime and punishment, transvestism, psychology of gender, homosexuality, cricket scores, and letters he wrote to newspapers.

Ives met Oscar Wilde at the Authors' Club in 1892; Wilde was taken by his boyish looks and persuaded him to shave off his moustache, and once kissed him passionately in the Travellers' Club.

In later life he developed eccentricities and developed a passion for melons, filling this house with them.

When the Second World War ended he allegedly refused to believe it and carried a gas mask with him everywhere in a case until his death.

Throughout his life, Ives had many lovers whom he called his children. He took care of them, gave them money and bought them houses. He often lived with more than one lover at a time and some stayed with him several years.