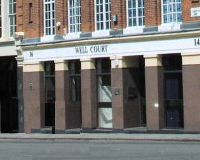 The well that gave Clerkenwell it's name can be seen here.

Description: The Clerks Well you can see in the basement of Well Court, can be seen from Street level in Farringdon Lane - peers through the windows.

It was this well that gives its name to the area now known as Clerkenwell and near here was the scene of medieval miracle plays that was performed by the local Parish Clerks of London.

The Widest Pavement in London», 1.5km