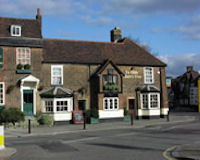 Description: This is one of London's ancient public houses; a Cherry Tree Inn recorded when the land was given to the poor of Barnet by Valentine Pool in 1624.

Captain Wade, a retired sea captain who was landlord in 1888, was responsible for planting a cherry tree on the 'island' in front of the building but over the years, this may have been one of many. The name of the pub is now synonymous with The Green and the area is graced by some of the prettiest flowering cherries.

The Cherry Tree has had its additions; the buttresses and porch were added in 1923 to stop the walls from bulging, but if you look at the left hand side of the archway entrance you will find signs of a history that goes back further.

Before the sound of horses' hooves were replaced by the roar of traffic, the Cherry Tree was also a Posting Coachhouse. The Post Coach would stable its horses at the inn overnight and the holes in the entrance to the inn yard allowed for the poles to be stored for the night.

One of the regular's in the early 20th century was an ostler known as Blind Phil who could tell the owner of a horse by running his hands over the horses head.