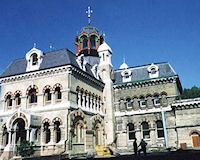 Abbey Mills Pumping Station was once nicknamed this!

It was designed in a cruciform plan, with an elaborate Byzantine style, and harshly nicknamed The Cathedral of Sewage.

You can see the buildings from the District Underground line. If travelling towards London, the old West ham Gas Works will appear on your left, and Abbey Mills on your right.

It has a twin, Crossness Pumping Station, south of the River Thames at Crossness, at the end of the Southern Outfall Sewer.

Two Moorish styled chimneys unused since steam power had been replaced by electric motors in 1933 were demolished during the Second World War, as they were a landmark for German bombers on raids over the London docks.

The main building is grade II* listed and there are many grade II listed ancillary buildings, including the stumps of the demolished chimneys.

An Architect to the Royals», 6.3km