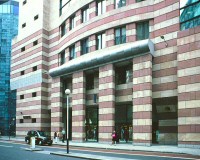 Description: Designed by Sir James Stirling this is one of London's most revered post modern buildings. It's bizarre shapes, forms and unusual brickwork reflect other structures such as the previous building here The Mappin and Webb.

It now provides not only office space, but houses restaurants and shops, plus a tube station underneath.

It was built in 1994 on a site owned by Peter Palumbo, after Stirling's death.

While it was constructed an archeological treasure trove was being unearthed below; the Roman finds of a Roman road and artefacts dating back to AD 54 - perhaps when Londonium was founded.

2» However one feels about the design of this building, it is surely not an appropriate edifice for the location. It looks as though it may have been designed by a child using early learning building blocks and does not blend in at all with its older neighbours, not least because it is pink. (Chris)
Posted by Chris on 2012-01-07
1» It is a huge disappointment that Lord Palumbo who once owned and cherished the Farnsworth house, was so confused as to destroy the Mappin&Webb builng and replace it with this cheap, awful nonsense which is already terribly aged as most of the post-modernist mediocrities. Pity he didnt go with his original plan for Mies Van Der Rohe. All the Post-modernist monstrosities should be bombed! (Eveline)
Posted by Eveline on 2010-01-25