Cave of the Golden Calf 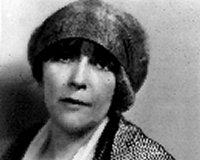 Description: Here in the basement Britain's first ultra-modern nightclub was founded in 1912 and attracted all the intelligensia of pre-war London.

Dramatic Vorticist decorations by Wyndham Lewis and Jacob Epstein provided the backdrop to legendary scenes of drinking and dancing, where bohemia literally rubbed up against aristocracy, whipped up until dawn by a ragtime band and a famously frenzied gypsy fiddler.

Events were regularly punctuated by dramatic outbursts from the club's founder-owner, the notoriously beautiful and volatile Frida Strindberg from Vienna, second wife of the Norwegian playwright, whose rapid departure to America in 1914 marked the club's closure.

Cave of the Golden Calf», 0km