The First All Night Rave 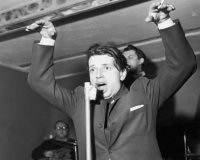 The source of the term 'all night rave' was coined here.

Description: This building, now at the centre of chinatown, has a startling musical history.

After World War 2, it housed the West End Jazz Club run by George Melly and the trumpeter Mick Mulligan. It was here that the first all night raves were held and also where the term was actually coined by Mulligan. Melly said:

At seven a.m. the band played its final number and we'd all crawl up out of the sweat-scented cellar into the empty streets of a Sunday morning in the West End. Hysterical with lack of sleep, accompanied by a plump art student, her pale cheeks smeared with the night's mascara, I'd catch the Chelsea bus and try to read the Observer through prickling red eyeballs as we swayed along Piccadilly, down Sloane Street, and into the King's Road. Then a bath, one of those delirious fucks that only happen on the edge of complete fatigue, and a long sleep until it was time to get up and face the journey to Cook's Ferry or whatever jazz club we were playing that evening.

The house next door has a plaque that was erected in 1870 by the Royal Society of Arts (although the original building was demolished in 1901 and the plaque re-erected as you see it today). It celebrates the fact that 17th century playwright and poet John Dryden (and the first ever Poet Laureate) lived here. Someone move the plaque please!

Libertines Up the Bracket Video», 3.4km