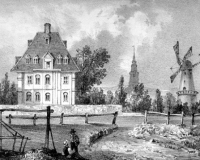 Description: This is where the old lunatic asylum Balmes House used to be, and probably where the soft term for crazy 'barmy' was derived from.

1540 Balmes House, or Baume's House (north of Hoxton), was built about 1540. It was named after its founders, two brothers who were Spanish merchants. In 1631 it was Sir George Whitmore's house. In 1680 it was bought by Richard de Beauvoir. In the 1750s it was taken over by Dr Meyer Low Schomberg for use as a private madhouse.

The De Beauvoir family, however, seem to have retained ownership of the estate.