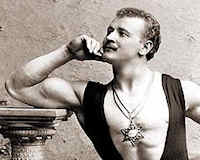 Description: Fitness pioneer Eugen Sandow lived here from 1906 until he died aged 58 in 1925. He devised the first major body-building contest, which was held at the Royal Albert Hall in 1901 and is known as the Father of Bodybuilding.

He also opened a gym, the Institute of Physical Culture, and performed on the stage all over the world.

Before Sandow arrived in London in the 1880s, he was famous thanks to his legendary music hall performances, world tours and constant self-promotion.

He was born in Friedrich Wilhelm Muller in the region of Konigsberg in East Prussia, although later research show his origins may have been in the remote borderlands of Poland.

He left in 1895 to avoid military service and in 1889 he made his first appearance on a London stage.

He was a huge success and wowed audiences with feats such as his finale act, 'Tomb of Hercules', in which he balanced a board on his shoulders carrying not only weights but also his manager.

His celebrity was enhanced by Henry Van der Weyde's studio photographs of him in a variety of poses, the most memorable of which captured him clad only in a fig leaf.