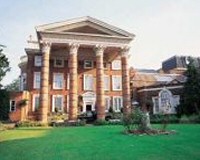 Where the England team stayed before winning the 1966 World Cup

Description: This hotel is infamous for being the hotel where the victorious England football team stayed the night before winning the 1966 World Cup.

Hendon Hall is a fine old diamond of a mansion. Originally known as Hendon Manor, it was mentioned in the Doomsday Book.

The memorial title, rights and income of Hendon Manor were sold for 13,000 in the late 18th Century to David Garrick, the famous actor and manager of the Drury Lane Theatre. David Garrick achieved such fame that his head was even engraved on the halfpenny coin. He fervently admired Shakespeare and created a memorial to him in the grounds of Hendon Manor. The simple tribute reads:

There is also a memorial to David Garrick, who died as Lord of the Manor of Hendon in 1779. This still stands in the front of the grounds, although Garrick was buried in Westminster Abbey. The memorial reads:

David Garrick
Born A.D. MDCCXVI, Died A.D. MDCCLXXIX
He was owner of the estate
Viarial Patron and
Lord of the Manor of Hendon

In 1852, Hendon Hall became a girls school and we know that plays were often performed on the lawns in the grounds on summer evenings.

Hendon Hall first opened its doors as a hotel in 1911, but was closed during the Second World War to become an RAF convalescent home. After the war it became a hotel again, starting off with a grand re-opening that local residents remember to this day.