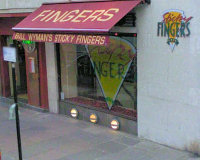 Description: In 1989, legendary Rolling Stones rocker Bill Wyman opened just the kind of restaurant he most liked to eat in - friendly and welcoming with excellent food and service - the rest as they say is history!

He called his restaurant Sticky Fingers in honour of the infamous album released by the band.

This haven for great food and original Stones memorabilia continues to provide an enviable environment for eating, drinking, and relaxing and is even stronger today than the trend it started in 1989.

Bill Wyman was the bassist for the rock nroll band The Rolling Stones from its founding in 1962 until 1993. Since 1997, he has recorded and toured with his own band, Bill Wyman's Rhythm Kings.