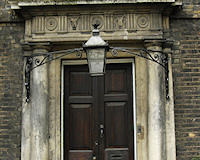 This is where Wallace Simpson met the Prince of Wales.

Description: This classic property was the centre of London society in the early 20th century, when it was owned by society hostess Lady Sybil Colefax. Her parties here were renowned and these doors saw Fred Astaire, George Gershwin, Hilair Belloc, Virginia Woolf and Winston Churchill.

It is alleged that Ernest and Wallace Simpson were introduced to the Prince of Wales here in 1935, who later gave up the throne for her.

Designed in 1723 by an Italian architect the house has been lived in since 1754 - the first owner was Mrs Mary Villiers, who was followed by the fourth Duke of Argyll and although he left in 1770 it has since been known as Argyll House.

Photographer Cecil Beaton wrote after a visit From the moment one arrived in the small panelled hall and savoured the aroma of dried rosemary burnt on a saucer, one knew one had arrived in a completely different atmosphere, refreshing as a sea change.

The George and Vulture», 4.0km