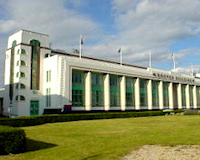 This is one of best Art Deco structures in the UK.

Possibly the finest Art Deco structure in Britain it was designed by Wallis, Gilbert and Partners for The Hoover Company who employed up to 600 staff in the its offices and works here.

The buildings were repainted and camouflaged with netting to avoid being spotted and bombed by German aircraft during World War II as it helped the war effort by building tank and aircraft parts.