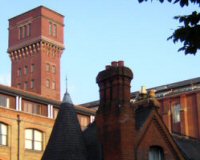 This is where the Match Girls' Strike took place.

Description: This massive suite of buildings here was probably the most important matchbox factory in Britain: Bryant and Mays.

The factory, opened in 1850, became famous for its products and notorious for the lack of concern for its work force. The health hazards of the work and the poor pay given eventually led to the Match Girls' Strike of 1888.

With the help and inspiration of Annie Besant they were successful in gaining better conditions. This led to the founding of the Matchmakers Union with Annie Besant as the secretary. She later served as President of the Indian National Congress. The representation of Noah's Ark ironically with the word Security on it was used as a trade mark on their matchboxes.

Bryant and May were influential in fighting against the dreadful disease known as phossy jaw, caused by the white phosphorus used in the manufacture of early matches.

Match production ceased in 1979 and the main building has now been converted into private apartments. It's now called Bow Quarter.