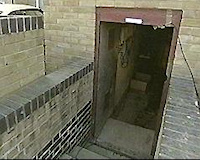 This is Churchill's secret back up bunker, only used twice.

Description: There is a small discrete door inbetween two modern homes here that hides the main entrance to the secret concrete rooms and corridors created in the Second World War as a refuge for Churchill and the war cabinet. They called it the Paddock - a code name for this underground bunker.

This part of Neasden was home to a very secret Post Office research centre created in the late 1920s and early 1930s.

Paddock duplicated the facilities of the Cabinet War Rooms in Whitehall but Churchill much preferred to be in central London and he only attended one of two cabinet meetings ever held in the Neasden bunker. He regarded it as a last resort if all else failed.

The Paddock was locked up and abandoned at the end of the war, and the post office research centre moved away in the early 1970s.

When the housing association reopened Paddock they found that it was very damp and that the lowest level was knee-deep in water. Stalactites hang from the ceilings and everything is covered in mould.