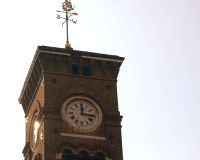 Description: Ivory House is now a luxury residential block originally built in 1858 and is the only original warehouse still standing in St Katharine Docks today.

It was restored to its current state in 1973, and today houses a mixture of shops, restaurants and apartments with stunning city views.

This original warehouse became popularly known as the Ivory House due to the vast quantities of ivory that passed through it - note the elephant sculptures/features around the current wharf area. At its peak in the 1870s, nearly 200 tons of ivory covered its floors annually. Aside from ivory, the warehouse also handled other luxury imports such as perfume, shells, and wine in the expansive basement vaults.

Tours: Pirates and penthouses at the old London Docks

Home of the Speaking Clock», 8.1km