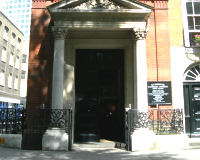 This is where Tommy Steele got married and nearly caused a riot.

Description: St Patrick's Church is a Roman Catholic Parish Church that was consecrated on 29 September 1792, the first Catholic church built in England after the English Reformation.

The church has an unusual long and thin shape due to plot constrictions given at that time, constructed out of bricks with a bell-tower.

The freehold was bought for the church for 9,000 in 1865 by Father Thomas Barge, the then parish priest, an Englishman trained for the priesthood in Lisbon, who had begun his priestly ministry at St Patrick's in 1847 when he was known as the handsome curate. He was still there forty years later, when he died after serving 25 years as parish priest, with his funeral drawing a crowd that packed out the Square and surrounding streets.

This is the church where singer Tommy Steele married former Windmill dancer and singer Ann Donoghue on 19th June 1960, where more than 2000 fans showed up and a strong police presence kept them under control.

It is rumoured that the catacombs under the church extend out some distance across the square.

Religious Phrase With A Twist», 1.1km

The Church of the Good Shepherd», 4.8km