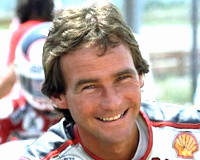 Description: This is where British motorcycling legend Barry Sheene (1950-2003) grew up with his family.

His father was an engineer and worked here in the workshop of the Royal College of Surgeons, living in a four-bedroom flat in the same square that came with the job. In the week he kept the machines running in the College and at the weekend he pursued his hobby of squeezing the best out of racing bikes. He raced the TT five times before retiring in 1956.

Frank and wife Iris had a daughter Margaret in 1945 before Barry joined them in 1950.

It wasn't long before he was railing against authority and once pulled a prank on a friend at school by drinking his fathers liquor cabinet, which resulted in his friend having his stomach pumped and the wrath of his parents and headmaster.

Barry hated school and prospects looked bleak upon leaving. He found jobs as messenger and delivery drivers and at the weekend helped his father with mechanics and engine work, and came to gain a reputation for speed while testing.

The rest is history and the British World Champion Grand Prix motorcycle road racer remained as champion from 1977 to 2015. His flamboyance, untamed hair and devil may care attitude made him a natural star.

Home to the Blues or Pensioners», 4.0km