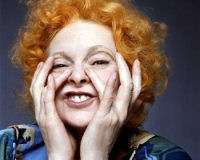 This is where Malcolm McLaren met Vivienne Westwood.

Description: The Harrow Weald campus of Harrow Art College here was where comedian Matt Lucas studied between 1990 & 1992 after leaving school. He studied English Literature, Theatre Studies & Media Studies A Levels plus a Maths GCSE retake. Of his time there he says

I remember when Margaret Thatcher resigned. Someone ran into the class to announce it and there was much excitement. She was an immensely unpopular figure amongst the young.