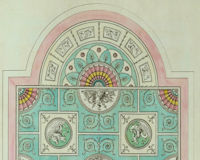 Description: Architectural designer George Richardson (17361817) was the father of draughtsman and engraver William Richardson and trained in the office of Robert Adam in Edinburgh.

In his youth he travelled Europe between 1760 and 1763 studying the remains of ancient architecture and painting that he would use in his career back in London.

In 1765 he gained the premium of the Society of Arts for the elevation of a side of a street in classical style, and became a frequent exhibitor at their gallery. He also became a regular exhibitor at the Royal Academy.

After living in King Street, Golden Square, he had removed by 1767 to number 95 Great Titchfield Street, 5 doors down from this house where he lived from 1781 until 1816.

In his old age he was in reduced circumstances, and suffering after the death of his wife, and was financially relieved by Nollekens.

Richardson produced a number of important reference books, a popular English version from Cesare Ripa's original 'Iconology, or, A Collection of Emblematical Figures'.