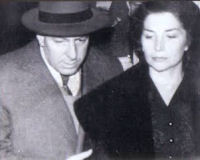 This is where Mad Frankie Fraser attacked gangster Spot Comer.

Description: Jack Spot Comer was a notorious British gangster during the 1930s, 1940s and 1950s. His progressed from protection rackets to housebreaking to bookmaking and even to a failed 1.25 million heist on Heathrow.

He claimed to have fought Mosley at the battle of cable street, knocking out his chief minder and wrestler called Roughneck.

In 1956, Spot and his then wife Rita were attacked in the street here by Mad Frankie Fraser, Bobby Warren and at least half a dozen others on the orders of rival gangster Billy Hill. He suffered a slashed face and other stab wounds, and both Fraser and Warren were given seven years in prison for the attack. It could have been much worse, with Fraser repeatedly stabbing Spot and another gang member using a butcher's chopper.

Fraser later said that he didn't even expect to be paid for the attack on Spot because he believed just like today's young gangsters that stabbing such a high profile target would earn him an unrivalled, almost priceless, reputation on the streets of London.