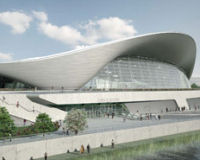 Description: The Aquatics Centre of the 2012 Olympic Park will be the gateway to the Park during the Games. It will include a 50m competition pool, a 25m competition Diving pool and a 50m warm-up training pool.

Detailed designs by architect Zaha Hadid for the 18,000 capacity venue were released in November 2006, following the design competition held in early 2005. In April 2008 Balfour Beatty won the contract to build the Centre and planning permission was granted in May 2008. Construction started in July 2008, two months ahead of schedule and will finish in 2011, in time for Test Events before the Games.

The impact of the building on the environment is being reduced by the use of renewable energy, sustainably sourced building materials and the reuse of pool water to flush the toilets.

After the Olympics in 2012, it will be transformed into a facility for both community and elite use. The temporary seating will be removed, leaving 2,500 seats - with the capacity to be increased for major competitions. 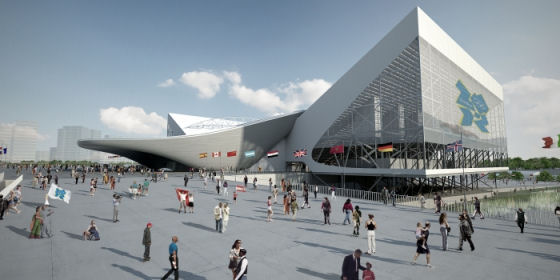