The Church of the Good Shepherd 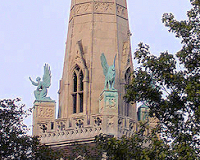 This is a church that was built for the Agapemonites...

Description: A Church built for a Victorian free love cult!

The Church of the Good Shepherd (orignally called the Church of the Ark of the Covenant) was built in 1892 for a sect called the Agapemonites. This group had been founded in the 1840s by a man called Henry James Prince. During that decade he created a community for his followers in Spaxton, Somerset where they could practice their unconventional views on marriage, morality and the messiah.

The London church which cost 20,000 was opened in 1896 by Prince's sucessor John Smyth-Pigott. The building looks like a typical Victorian church except for the huge sculptures of the symbols of the Evangalists around the door and around the steeple. The interior has stunning stain glass by the Victorian illustrator, Walter Crane.

The sect's presence in North London, came to an end not many years after it was built when in 1902 Smyth-Pigott claimed he was the messiah and that he could walk on water. Venturing out to the ponds on Clapton common to show eveyone he could perform this miracle inevitally led to his failure at water walking and the police had to protect him from the angry mob that were not impressed that this self proclaimed messiah was a fake. So Smyth-Pigott fled the area and went back to the town of Spaxton.

The church is now owned by the Ancient Catholic Church. Occasionally it is possible to get a look inside however even the exterior is worth a visit!

The Holy Trinity and Clowns», 1.9km

A History of differing Worship», 7.0km