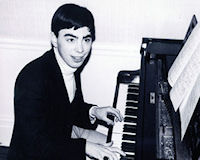 Julian wrote in an article for The Guardian in 2004, the following: I look back on my childhood in the run-down, red-brick, Victorian block of flats in London's South Kensington with immense affection: 10 Harrington Court was an extraordinary place to be brought up. It was a crazy, hothouse atmosphere populated by exceptionally gifted, strong-willed characters who seemed to drift in and out whenever they pleased. Amid the electric organ, assorted pianos, violins, cellos, french horns and trumpets were pedigree mice, Siamese cats, ancient gas fires that farted, an aged, deaf, grandmother, a brother (and his lyricist) writing musicals, a concert pianist who was about to win the Tchaikovsky prize, and various girlfriends wandering about in equally varied states of undress. Expectations of excellence were the norm and achievement was the never-stated aim.

It was here that Andrew was living while he was writing his first musicals including Joseph and the Amazing Technicolor Dreamcoat which was performed with Tim Rice at Colet Court.