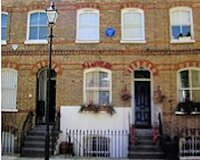 The house where Charlie Chaplin lived with his mother.

It is said to have been the inspiration for the settings of both his famous films The Kid, plus as the home of the blind girl in City Lights.

His mother left his fatehr in 1893 and in 1896 Hannah's mental state deteriorated and she was committed to an asylum (Charlie and Stanley lived temporarily with their father) and on her release from the asylum Hannan Chaplin rented a room here for her family.

The plaque here was placed by the Dead Comics Society in 1993 (now the British Comedy Society).