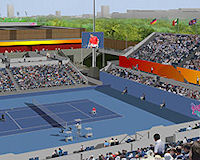 Description: This new Olympic sporting facility will host the wheelchair tennis, and it's on the site of the old Eton Manor Sports Club, which had been disused since 2001.

This community sporting facility was established in the 1900s and by the middle of the last century the Eton Manor Boysâ Club had gained a reputation as an elite sporting association.

It will host three temporary training swimming pools, and then it will host Wheelchair Tennis during the 2012 Paralympic Games, and remain a training facility for Aquatics competitors including water polo.

There will be nine competition tennis courts and four warm-up courts. The total of 10,500 seats for spectators will include a 5,000-capacity show court.

After the games Eton Manor will provide four indoor and six outdoor tennis courts, a hockey centre with two competition pitches and five-a-side football pitches. The facilities are intended to be able to accommodate elite hockey events for up to 15,000 spectators.