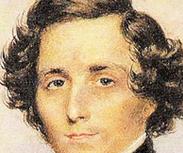 This is where German romantic composer Mendelssohn composed.

Description: The famous German composer Felix Mendelssohn wrote a piano piece here on a visit in 1842, inspired by the tranquility of the area around Camberwell.

He described it as a 'song without words' calling it 'Camberwell Green' which became a hit when he later renamed it to Spring Song. Mendelssohn is now regarded as one of the most popular composers of the Romantic era.

Otto Benecke was the treasurer of the Camberwell Provident Dispensary, a charity which provided poor people with medical care and medicine in return for a
small monthly subscription.