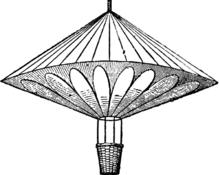 The world's first ever parachutist is unfortunately buried here.

Description: 'Robert Cocking' was the developer of an early unsuccessful parachute design and the first person to be killed in a parachuting accident.

Robert Cocking was a professional watercolour artist with keen amateur interest in science. He had seen Andre-Jacques Garnerin make the first parachute jump in England in 1802 and been inspired to develop an improved design.

On 24 July 1837, at 7.35 pm, fate was to offer a fatal blow...Despite the fact that Cocking was 61 years old, was not a professional scientist, and had no parachuting experience, the owners of a balloon agreed and advertised the event as the main attraction of a Grand Day Fete at Vauxhall Gardens.

A large crowd had gathered to witness the event, but it was immediately obvious that Cocking was in trouble. He had neglected to include the weight of the parachute itself in his calculations and as a result the descent was far too quick.

Though rapid, the descent continued evenly for a few seconds, but then the entire apparatus turned inside out and plunged downwards with increasing speed.

The parachute broke up before it hit the ground and at about 200 to 300 feet (60 to 90 m) off the ground the basket detached from the remains of the canopy. Cocking was killed instantly in the crash, his body was found in a field in Lee.

And so to this location, the final resting place of Robert Cocking.