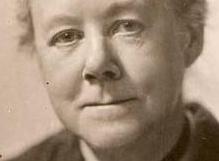 The site of the Penny/Farthing Bundle Lady charity.

Description: The Fern Street Settlement charity was founded on this spot in 1907 by Clara Grant OBE, the headmistress of Devons Primary School in Bow.

One of the first things she did, which gave the Settlement its most famous tradition, was to have a small wooden arch made. It was inscribed with 'Enter all ye children small, None can come who are too tall.'

She died in October 1949, but the children still came running every Saturday morning to queue and pass under the arch. By then it was a penny bundle and the bar had been raised by 4 inches.

Now the Settlement runs a day centre for pensioners which provides adult education classes, social activities and a lunch club. The Settlement also serves families by providing summer holiday camps for young people, outings and the provision of presents for children at Christmas.