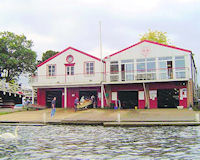 This is where 5-time Olympian Sir Steve Redgrave learnt to row.

Description: This great old rowing club dating back to 1871 suffered a terrible fire in August 2011 and is still recovering from the effects.

The club was made famous by five-time Olympic champion Sir Steve Redgrave who is a life member and vice-president of the club and started his rowing career in Marlow.