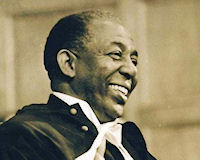 Cricketer and race reforms pioneer and author of Colour Bar.

He was born in Trinidad, and named after an Irish cricketer his father Lebrun had befriended on a tour of England.

Learie, or 'Connie' as he was affectionately known in cricketing circles, made his international debut in 1921.

In 1928, Constantine played a notable all-round innings for Trinidad on tour at Lord's against Middlesex, taking seven wickets, and hitting 103 runs in just one hour.

Sir Alec Douglas-Home, a future Prime Minister, described Constantine's performance as the best he had ever witnessed. Michael Parkinson said he played like a man walking a tightrope without a safety net.

After his career, he undertook legal study, and Constantine was called to the Bar at the Middle Temple in 1954. In 1956, he became Minister of Works and Transport, and in 1961, he was inaugurated as High Commissioner of Trinidad and Tobago, which gained full independence a year later.

He was knighted in January 1962 and was appointed to the Sports Council in 1965, and given a seat on the newly formed Race Relations Board in 1967.

In 1968 he became a governor of the BBC and - having twice been mooted as a possible candidate for election to the House of Commons - he was raised to the peerage in 1969, taking the title of Lord Constantine of Maraval and Nelson.

English Heritage put a blue plaque up here in December 2013.