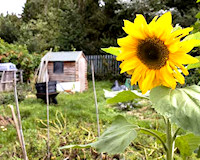 The first allotment site in London.

In 1834 Lord Maynard granted land off Hagger Lane (now Forest Road) to be used by the poor for their own produce. Locally it was formerly called 'Canada', and was enfranchised in 1924.

In 1939 3 acres were sold to the Metropolitan water board to produce Waterworks near the A406 junction between Woodford and Walthamstow.