The Museum of Childhood 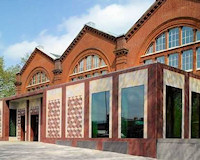 Branch of the VandA's collection of childhood objects.

Description: The V&A Museum of Childhood can be found in the heart of Bethnal Green in East London, a branch of the Victoria and Albert Museum - the United Kingdom's national museum of applied arts. It's goal is to hold in trust the nation's childhood collections and be an international leader in engaging audiences in the material culture and experiences of childhood.

In 1690, in order to halt growing urban development, the gentry of Bethnal Green bought this plot of land and put it into trust as Common Land Ã¢â¬â land for the lower classes of society to grow crops and graze cattle.

Only those responsible for Bethnal Green were interested and in 1868, following the architectural guidance of J W Wild, construction on the plot here began. The Prince of Wales opened the Bethnal Green Museum on the 24th June 1872.

Female inmates of Woking Gaol laid the fish scale pattern marble floor (although you can tell where some were more diligent than others).

FW Moody designed the murals in the north and south exterior walls as educational pieces.

In 1922 Arthur Sabin became head curator and was instructed to reorganise the museum, so, seeing it was frequently filled with bored, noisy children he sought to make it more child-friendly. He established a classroom, employed teachers, and began sourcing child-related objects. Queen Mary (wife of King George V) donated many toys of her own, and a Mrs Greg of Leeds donated her collection of toys to the museum.

In 1974, director of the V&A Roy Strong, instigated changes that resulted in the Bethnal Green Museum re-opening as The Museum of Childhood. All childhood-related collections held at the South Kensington site came to Bethnal Green and all non-childhood related objects here went in the opposite direction.


The Museum of Childhood», 0km