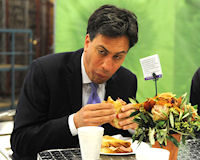 Description: This is the market cafe where the ill-fated Labour leader Ed Miliband came a cropper with a bacon sarnie. On Wednesday 21st May 2014 he visited the market and attempted to get through a classic early morning bacon sandwich before giving up. This was largely due to the doorstop slices of white bloomer but it was too late, photographers took advantage of Red Ed's struggles with the bap and he was pilloried to election defeat the following year.The cafe owner was Tony Foufas, who proudly mentioned to him that his son Christo was an LBC radio presenter. Ed feigned ignorance.

Snails in the Basement», 2.4km