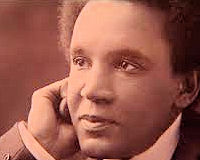 This is where Hiawatha was born.

The blue plaque was added to the front in 1975 stating Composer of the Song of Hiawatha lived here. It was indded here where he composed the bulk of Hiawatha's Wedding Feast - his defining work.

His married Jessie Walmisley while in this house in 1899, and their son Hiawatha was born here in October 1900.

By this point the four-part The Song of Hiawatha had received tremendous praise and been performed at the Albert Hall that March. Hiawatha's Wedding Feast (1898) was then followed by Hiawatha's Departure (1899), an overture, and then finally The Death of Minnehaha.