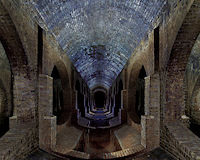 The site of a spectacular subterranean secret reservoir.

It's inaccessible currently due to problems with the stability of the vast stonework interiors.

It was completed in 1868, the spoil of which was used to artificially build up the north-east section of the park. It's was covered by tennis courts (now long gone) and was capable of holding up to 5 million gallons of water.

Guy Ritchies Sherlock Holmes in 2009, and Paddington in 2014 were both filmed down here.