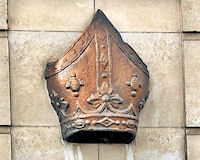 One of the oririgal eight gates of the London Wall.

Description: Above the side entrance to Boots here is where the Bishop's Gate, one of the original eight gates in the London Wall, used to stand. Above the door is a stone bishop's mitre, facing the Heron Tower.

The gate was originally Roman, and was rebuilt by the Hansa merchants in 1471 in exchange for Steelyard privileges, and often displayed the heads of criminals on spikes.

The final stone wall erected in 1735 by the City authorities and demolished in 1760.

The Oldest Bridge still in use», 12.km