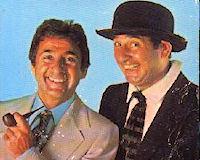 Description: This formerly failing school in East Tottenham dating back to 1911, was turned around to outstanding in record time.

It's famous for it's former comedian alumni's Mike and Bernie Winters and also dancer and TV celebrity Lionel Blair.

Mum and Uncle Mickie strolled down the road to meet the new scholar and spotted a little figure in the distance, dragging a coat behind him. When they met up, the conversation went like this:

Mum: What have you got there Bernie?
Bernie: A Coat.
Mum: But you didn't go to school with an overcoat.
Bernie: I know, but when the bell went, all the other boys were taking coats, so I took one too.


In an interview with the Independent, Lionel Blair told of his first day here:

I remember my first day at Crowland Road school. At playtime, I went into the senior, rather than the junior, cloakroom and couldn't find my coat. A teacher found me in floods of tears. It was so traumatic, I can't tell you.

It suffered a bad fire in 2005 which destroyed a building.