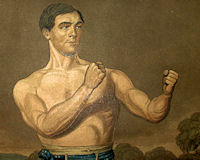 Description: Here, Anne Street, Agnes Street, and Frances Street stood from the early 1800's until Waterloo station completed gobbled them up by the 1950's. Where the Hole in the Wall now is stood Frances Street and where legendary boxer James Burke died.

Burke learned to box while working as a waterman on the River Thames. An older boxer gave him some training and put him in the ring against Ned Murphy in 1828 with the match lasting over 50 rounds!

He was defined by a particularly brutal English Heavyweight Championship fight on 30th May 1833, that somehow over 3 hours! Burke defeated Irish champion Simon Byrne after a purported 100 rounds, and having survived having his ear bitten through in the 19th round. Brutal marathon fights were the norm. Byrne died of his injuries three days later.

Burke was arrested, tried for murder, but acquitted on the 11th July 1833 and released.

After becoming notorious he sailed for the United States and fought the new Irish champion Sam O'Rourke in New Orleans on the 6th May 1837. He became the first British champion to fight on American soil. But this also ended badly with rioting and Burke having to flee on horseback!

On the 12th February 1839, Burke fought William Thompson for the English heavyweight crown but was disqualified in the 10th round for hitting his opponent when he was down. Thompson retired the next month and Burke claimed the title.

At the tender age of just 35 and in extreme poverty, Burke died of tuberculosis here at home on the 8th January 1845.

The address was recorded then as Frances Street, Waterloo Road, Waterloo, London.

Burke was inducted into the Boxing Hall of Fame in 1992.