Arsenal and The Sutton Arms 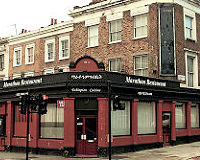 Description: The Sutton Arms here was famous is the early 1900s as the starting point for a race (London's newest marathon) between Great Northern Railway workers from King's Cross. It was approximately 5.3 miles finishing at Noel Park Station in Wood Green (Shopper's City today).

All the participints had nicknames, such as 'the Ginger Chicken'. I was amazed to find it is now called the Marathon Restaurant, I wonder if the story had been passed on.
Bob Rust (March 2016)

Later, in a nod to the past, it became a restaurant called the 'Marathon Restaurant'. Today its a successful Ethiopian restaurant, called The Merkato.

In 1977, after watching their team beat England 2-1 at Wembley, 300 very happy Scotsmen arrived here for the rest of the night. They laid clumps of Wembley turf out along the bar during their celebrations!

Home to the Blues or Pensioners», 4.9km