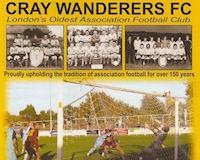 The oldest football club in London.

Description: Cray Wanderers was formed in 1860, truly the first football club in London. They were formed by migrant workers in the midst of the construction of the Cray Valley railway viaduct, who teamed up with villagers from St. Mary Cray for a 'lunchtime kick about'. Not too long after, a ground was laid out, at what is now Star Lane Cemetery.

It is over 40 years since Cray Wanderers last had a stadium of their own, sharing currently here at Bromley FC.

The Lord Derby and Football», 7.3km

Superhoops in the Bush», 13.km