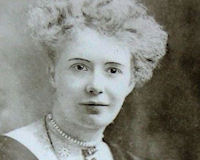 Where the first female trade unionist lived and died.

Description: During World War One, womens rights pioneer Mary Macarthur (1880-1921) fought for equal pay and better rights for women. She fought particularly for those working in appalling conditions in factories. She is remembered as a brilliant orator and publicist, and was largely responsible for increasing the female membership of trade unions from 142,000 in 1892 to 1.3m+ in 1920.

Born in Glasgow in 1880, Macarthur was elected president of the Scottish National District Council of the Shop Assistants' Union in 1902. A year later she became the first woman to be elected to its national executive.

In 1918, women workers on London buses and trams were the first to strike for equal pay, a moment she described as 'a landmark for the women's movement and for trade unionism'.

She lived here while she was at her most prominent. Frances O'Grady, general secretary of the Trades Union Congress, said at the unveiling of her blue plaque in 2017: 'Thanks to her and others like her there were more than a million women in unions by 1918.'

During her investigations, she contracted diptheria, and died here in 1921.

The World's First Ever Cashpoint», 7.4km