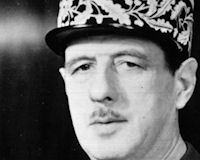 The convent where De Gaulle stayed after Hitler invaded France.

The first reference to Frognal is as a tenement in the 15th century, highly likely to be right here - on the site of the later Frognal House.

After the war in Crimea, the house became the Sailors' Orphan Girls' Home.

In 1968 the building was converted to a finishing school 1968 and today the building, which dates back to circa 1740, is the home of St. Dorothy's Convent.