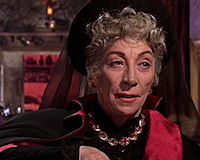 This is where the quintessential Miss Haversham lived.

Description: Martita Hunt (1889-1969) was an Argentina-born English stage and film actress, best-remembered for her role as the mad, reclusive Miss Havisham in David Lean's Great Expectations (1946).

She won a Tony Award in 1949 for Broadway debut as Countess Aurelia in the English-speaking production of The Madwoman of Chaillot.

She died of bronchial asthma here.

Matinee With A Difference», 2.4km