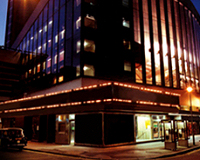 Description: The modern New London theatre is owned by Andrew Lloyd Webber's Really Useful Group and is built on a site of previous taverns and music hall theatres.

Nell Gwynn was associated with a tavern here called the Great Mogul, and presented entertainments in an adjoining hall. The site developed as a music hall in 1851 with the build of the Middlesex Music Hall, subsequently rebuilt in 1911 by Frank Matcham. 8 years later it became famous as The Winter Garden which closed in 1959 and was demolished in 1965 and rebuilt in 1973 as the current theatre.

It has debuted many shows including Andrew Lloyd Webber's record-breaking Cats in 1981.