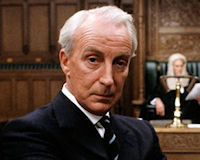 This is where Scottish actor Ian Richardson lived.

He famously portrayed the Machiavellian Tory politician Francis Urquhart in BBC drama House of Cards. On the big screen he was the mole finally unmasked by Sir Alec Guinness and slain by Ian Bannen in John Le Carr's Tinker, Tailor, Soldier, Spy (1979).

He was also a leading Shakespearean stage actor at the RSC between 1960 to 1975.

Richardson's last years saw him in Miss Marple in 2004, the Lord Chancellor in Bleak House, and 2006 as the voice of Death in Terry Pratchett's Hogfather.

A week after his death Dame Helen Mirren burst into tears dedicating her Best Actress BAFTA to him.

He was survived by his wife, Maroussia Frank, whom he married in 1961, and their sons, Jeremy and Miles.