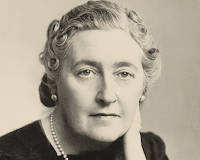 This is where Agatha Christie wrote Death on the Nile.

Description: This house was home to best-selling crime novelist Agatha Christie (1890-1976) and her second husband, the archaeologist Max Mallowan (190478) from 1934 until 1941, when it was badly damaged during the Blitz.

She wrote some of her most famous works on the second floor here including The ABC Murders and Death on the Nile.

In Christie's autobiography she said When I saw it I wanted to live there as badly as I had ever wanted to live in any house. It was perfect, except perhaps for the fact that it had a basement. It had not many rooms, but they were all big and well-proportioned. It was just what we needed.