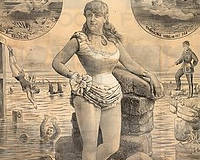 This is where Agnes Beckwith grew up a swimming prodigy.

Description: This is where the young swimming prodigy Agnes Beckwith grew up with her parents and three brothers. In the 1881 census she, her father Frederick and brother Charles gave 'Swimmer' as their profession!

She joined the local baths aged four and became prodigious. She set London alight with her effortless swimming feats. For example, aged just 14 she swam the River Thames from London Bridge to Greenwich (5 miles), in 69 minutes.' The London Standard on the 2nd September 1875 reported The event created a great deal of excitement, and all along the route the progress of the swimmer was watched by excited crowds on the wharves and barges.

She took part in 30-hour endurance swims and with her swimming troupe of girls exhibited in North America and Europe during the 1880s.

The Lord Derby and Football», 8.4km